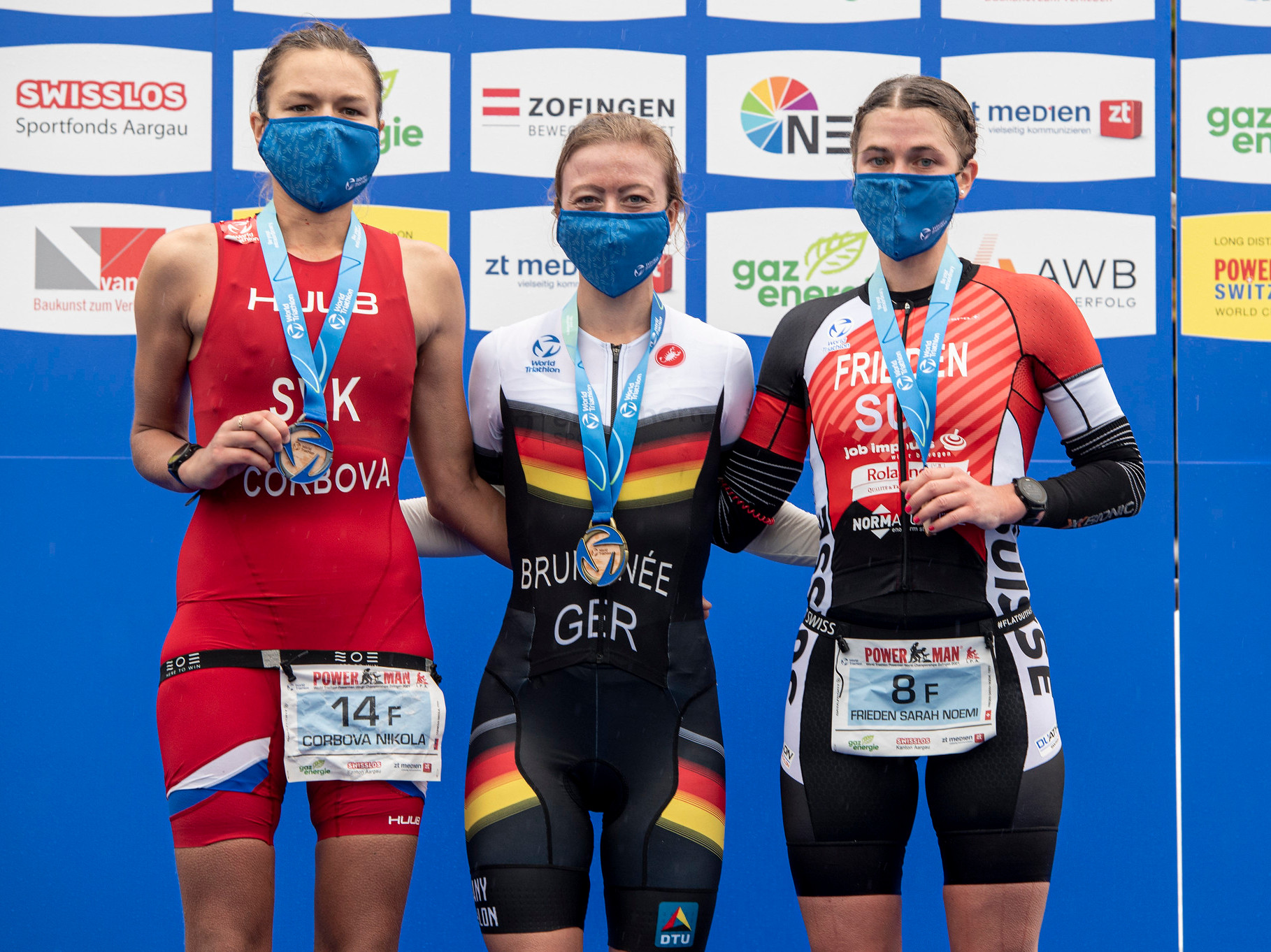 Germany’s Merle Brunnée won the long distance duathlon world championship. The men’s gold medal went to Belgium’s Seppe Odeyn. Some top athletes gave up. The weather conditions were extremely difficult. There was continuous rain and low temperatures. – Switzerland reached podium places in the men’s race with Jens-Michael Gossauer (silver) and in the women’s race with Sarah Noemi Frieden (bronze). The 32nd edition of the traditional event in Zofingen had to be postponed in 2020 because of COVID-19, first to May 2021 and finally to September 2021.

The World Duathlon Championships took place yesterday in continuous rain and low temperatures of 12 degrees Celsius, demanding everything from the athletes. Thus the Powerman in Zofingen lived up to its nickname “Showerman”. One day earlier, on Saturday, there was beautiful autumn weather.
The World Duathlon Long Distance Championships (10 – 150 – 30 km) was already exciting before the competition, because two prominent top athletes could not start. The current title holder from Belgium, Diego van Looy, could not compete because he had a serious accident during training a few weeks ago. Due to illness, Frenchman Gaël Le Bellec, who had triumphed in 2014, 2015 and 2018, also had to withdraw at short notice. Thus, the Belgian Seppe Odeyn, the winner of 2016, and the Russian Maxim Kuzmin, the winner of 2017, moved into focus. Also during the competition it remained exciting, both in the elite women and in the elite men.

Odeyn then continuously extended the lead and finally crossed the finish line after 6 hours and 6 minutes and 41 seconds with a lead of over twelve minutes over Gossauer and Bourgeois. World Champion Seppe Odeyin the first statement at the finish: “I had not paid much attention to the weather forecasts. It was Belgian weather. Maybe that was an advantage for me.” Silver medalist Jens-Michael Gossauer: “That was my hardest day in in my life, I fought extremely. Now I’m happy.”

Disappointment for Swiss women
In the women’s event, reigning title holder Nina Zoller was eliminated after just two hours. She was unable to continue due to hypothermia, she announced. Daniela Schwarz (SUI) also gave up in the first half of the race. After four hours, Melanie Maurer also ran out of strength. She even needed medical help. Before, Melanie Maurer led the field with a big advantage of 12 minutes. After that Merle Brunnée (GER) took the lead, followed by Sarah Noemi Frieden (SUI), Nikola Corbova (SVK) and Ann Schoot Uiterkamp (NED). Merle Brunnée extended the lead afterwards. World Champion Merle Brunnée in her first statement at the finish: “I am a bit surprised myself about this result. After all, it is my first duathlon ever. It’s wonderful.”

700 participants
About 700 sports enthusiasts took part in various competitions on the occasion of the World Triathlon Powerman Long Distance Duathlon World Championships 18-19 Sep 2021. Saturday was entirely dedicated to popular sports with PowerKids (about 150 children) and CharityRun (100 participants). Visitors strolled through the Expo Zone where some sponsors pitched their tents: www.powerman.swiss/sponsoren. Athletes came from 25 different nations. Europe was very well represented. Due to COVID restrictions, athletes from Asia, Oceania and South America were hardly represented.

NEP Switzerland: New main sponsor
NEP Switzerland AG was responsible for the professional TV production – with numerous cameras and impressive images from a bird’s eye view from a helicopter. NEP Switzerland is part of the NEP Group, a leading TV producer in the world with over 4,000 employees. More info at www.nepgroup.ch. NEP is the new main sponsor of the Powerman Zofingen since this year. Peter Arnold, Head Media Powerman Zofingen: “We have been counting on the high performance of NEP for several years. This year we have further perfected the production. The moderation team has the best conditions at the Swiss headquarters in Volketswil.
Ranking List Long Distance World Championships Men